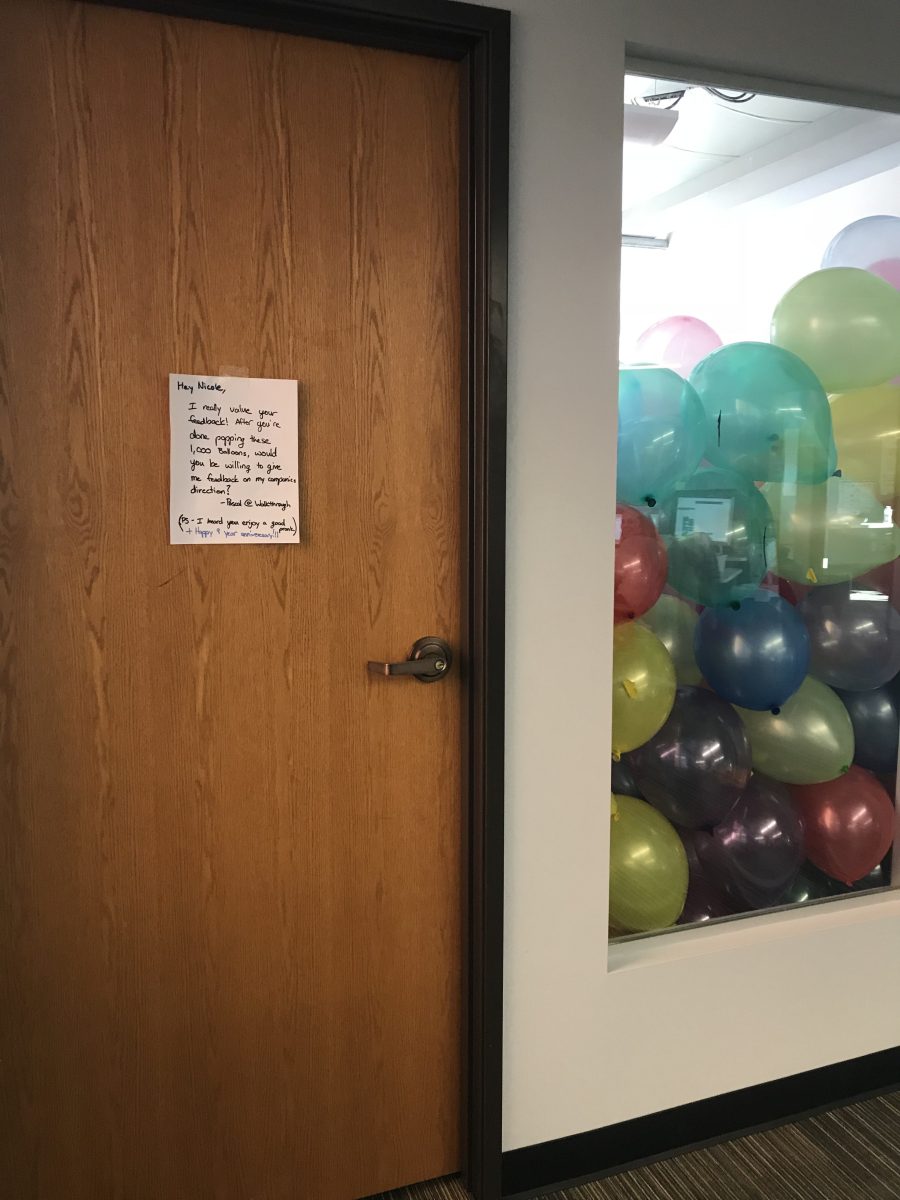 On Monday, I walked into my office to find it filled, and I do mean filled to head height, with balloons.  Check out the video of us frolicking in my balloon office.

Wait, what? Who would do such a thing?

Let me answer that by telling you a story that dates back probably 5ish years.  Pascal Wagner was trying to get a meeting with me.  This was in an era when I was getting between 300-500 emails a day (I’m not exaggerating) and was in back to back company interviews for the Techstars program, so was probably in 75-100 meetings a  week (also, not exaggerating, 15 min long back to back meetings).  I repeatedly was turning Pascal down for a meeting request.  He was pleasantly persistent, not annoying, but kept asking me and I kept declining.

One day I log into Facebook to see that Pascal had taken out an advertisement on my Facebook page, targeting me exclusively, from him, to get a meeting.  Well, I was so impressed with his creativity that I quickly agreed.  It was worth cancelling other things to make time for Pascal and when we finally met, I found a driven, determined, intelligent and creative man.  I immediately became a fan.

Since then, Pascal has been a fixture in the Boulder community.  He’s worked with a handful of Techstars companies through his own startup that did Facebook advertising consulting (not surprising!).

Fast forward to today – Pascal and his current company Walkthrough are in the Techstars Boulder program (yes!) and are now officially part of the family.  This past Friday, I did office hours with all the awesome Boulder companies. When I got through my day, I realized I had only met with 9 companies instead of the full 10.  When I got back to my office and compared notes, I realized I had missed Pascal’s company, so I sent an email to the Techstars staff asking for help to correct that oversight.  That was Friday.

Monday morning I was greeted by my office being filled with balloons and this wonderful note from Pascal on the door: 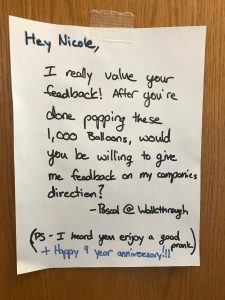 I wonder if Pascal somehow thought the meeting oversight was deliberate, and thus did this to get my attention.  Well, IT WORKED.  This is single-handedly the best meeting request I have ever gotten.  Pascal and his team, alongside some help from David Kircos at Techstars, spend 3-4 hours filling and tying 1,000 balloons – and they have the blood blisters to prove it. 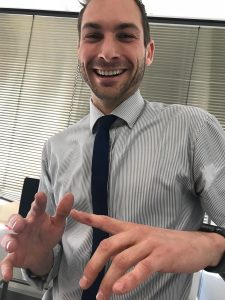 Swimming around in my office full of balloons was so enjoyable that I left it for 2 whole days for the office staff to take advantage.  Every meeting I had started with a balloon swim. Everyone I dragged in there started out reluctant, and by the end, they were giggling uncontrollably.  Even Martinette, our office manager declared this “to be the best day of my life”.  Every now and then a balloon would pop, and send everyone into another frenzy of giggles.  We started a pitch from a founder by doing a balloon swim.  I conducted an entire meeting with another founder in my office, sitting on chairs and submerged in a colorful wonderland of balloons.  So while Pascal and team thought they were playing a prank on me, what they actually did was deliver joy to a couple of dozen people (myself included).

Even popping the balloons was fun, as I went American Psycho on them with my sharp knife.  I had to wear noise-cancelling headphones though because my ears began ringing quickly after I started!  And the balloons did double duty as I took 4 BAGS of them home for my daughter’s birthday.

Anyway, this was a really fun week at Techstars.  I feel grateful to be worthy of the time invested in this joke and to be surrounded by entrepreneurs and colleagues who are playful and use creativity in a positive way to accomplish goals.  I have renewed respect and affection for Pascal, David Kircos, and team. And I think every office on the planet should take an unused closet somewhere and fill it with balloons.

So thank you Pascal.  You made my week, maybe even my year, and gave us all memories forever.

And for everyone else, YES, Pascal is getting his feedback meeting on Friday!

This site uses Akismet to reduce spam. Learn how your comment data is processed.

I grow startups through access to funding and helping entrepreneurs become their best selves. I work at Techstars, I’m a mom, I live in CO, I love all things outside, and I do all my own stunts.

We bought a bed

How connected are we, really?

Why the diversity conversation is so hard for me.